Formed in 2011, Trio Brasileiro quickly made a name for itself as an ensemble worthy of international attention. And, after four recordings and successful tours through Europe and North and South America, they are receiving more than their share of it. Among the many accolades, their 2017 recording with the brilliant Israeli clarinetist Anat Cohen, Rosa Dos Ventos, was nominated for a Grammy Award for Best World Music Album, and was named one of the top twenty jazz recordings of the year in the Downbeat Magazine Readers' Poll.

Trio Brasileiro’s stunning virtuosity is matched with remarkable musicianship and a deep devotion to the language of music to achieve a compelling sound that shares equal parts understated subtlety and bone deep groove. But it is their love of the traditional music of Brazil and the connection between brothers – by birth and by bonds of friendship – that create a very rare and profound beauty.

Trio Brasileiro is dedicated to performing the great traditional choro music of Brasil by Jacob do Bandolim, Ernesto Nazareth and others, as well as their own compositions, which are modern reflections of that great traditional musical form.

Composer and guitarist Douglas Lora moves with versatility between classical and popular music, and has been established as one of the most prominent artists of his generation. A member of the Brasil Guitar Duo (with Joao Luiz) for more than fifteen years, and seven-string guitarist of the choro and samba band Caraivana, Douglas Lora has a full touring schedule worldwide, and has collaborated with artists including Paquito d’Rivera, Marco Pereira, Jovino Santos Neto, Ney Rosauro, Marina Piccinini, and many others. In 2011 he joined his brother, percussionist Alexandre Lora, and mandolin virtuoso, Dudu Maia, to form an ensemble dedicated to Brazilian traditional music, Trio Brasileiro.Lora has performed as a soloist with the Dallas Symphony, Houston Symphony, Dayton Philharmonic, Orquesta Metropolitana of Sao Paolo, and the Orchestra of the Americas. Critics and audiences around the world have praised his recordings with the Brasil Guitar Duo, and distinguished artists and chamber ensembles have recorded his compositions.Douglas Lora studied composition and classical guitar at Faculdade de Artes Alcantara Machado in Sao Paolo and received a Master’s Degree in Performance from the University of Miami. Lora was a winner of the Concerts Artists Guild Award in 2006 with the Brasil Guitar Duo, and has eight recordings and five original film soundtracks to his credit. 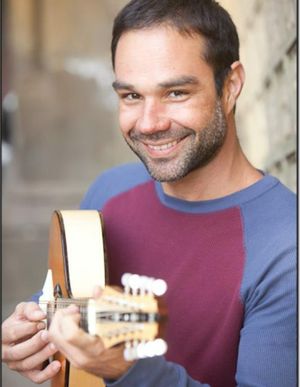 A virtuoso of the bandolim (Portuguese for “mandolin”), Dudu Maia served for five years as the bandolim professor of Brazil’s most respected Choro school, the Escola Brasileira de Choro Raphael Rabello. Considered to be one of Brazil’s finest mandolin players, Dudu brings to his work a lifetime of research and study of Brazil’s greatest musical traditions. Dudu has developed his own method of teaching Choro and the Brazilian mandolin. He's the co-author of "The Choro Handbook" alongside guitarrist Henrique Neto, a pioneering method for those who want to learn and go deeper into Choro Music. His work also stands out abroad, he often travels through the United States, Canada and Europe, spreading his way of performing and teaching. Dudu has taught for four consecutive years at David Grisman’s & Mike Marshall’s Mandolin Symposium in Santa Cruz, California. Dudu also leads Centrum Foundation's Annual Choro Workshop in Port Townsend, WA, since 2011. He has been also to Savona, Italy, to teach at Carlo Aonzo’s Accademia Internazionale di Mandolino Italiano. He is also an experienced music producer and has recorded and produced many artists besides writing original film soundtracks. Nowadays, he works at his own studio, @estudiocasadosom , in Brasília, Brazil. Dudu also presents a TV show called Programa Casa do Som.The show features recording sessions and interviews with several outstanding musicians from Brazil and abroad.

Alexandre Lora moves easily within different styles of Brazilian popular music and World music, performing  as a percussionist and Hand Pan/Pantam soloist. Lora achieved his Bachelor's degree in Drumset Performance in 2002 at FAAM (Faculdade de Artes Alcântara Machado). He has studied classical percussion for 3 years at the EMM (Escola Municipal de Música de São Paulo), and got his Master’s degree in Musicology and Music Education at the UAB (Universidad Autónoma de Barcelona) in 2009. In 2010  has performed in 33 cities around Spain, participating in the project “DiverSons" (Banco La Caixa). In 2011, as member as the XLJazz Orchestra, he had performed in Amsterdam  and Rotterdam along the great piano player Ramon Valle. Since 2012, Lora is a faculty member at Centrum Choro Workshop (Port Townsend-USA) and has performed with his Trio Brasileiro in major US cities such as New York, Chicago, Boston, Seattle, Miami and Portland. Alexandre has collaborated with accomplished musicians such as Anat Cohen, Jovino Santos Neto, Mestrinho, Ramón Valle, Mariana Aydar and Brazil Guitar Duo. In 2015 he has released his first solo CD, with all original compositions, entitled “Oriente". In 2016 and 2017 has performed at “GRIASDI”, Hand Pan and World Music Festival (Áustria), solo performance.During the first “Pantam Summer School” 2017, also in Áustria, has worked as a teacher along renowned artists, as Adrian J Portia, Carlos Kabeção Rodrigues, Jeremy Natthag, Claudiu Lazarciuc and Florian Betz.His second Solo CD entitled “Hand Pan for Peace” was released in July - 2017. Grammy nomination 2018: Best World Music Album for “Rosa dos Ventos” - Anat Cohen & Trio Brasileiro.